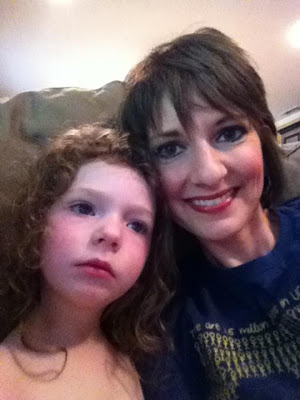 I've had the pleasure of spending the last day and a half with this precious little princess. She's got some sort of coughy, sneezy, snotty virus. Or, so I thought. This morning, when I hoisted her out of the bed to move her to the couch, we made a pit stop in the hallway for a little vomiting.

As a general rule, I have a stomach of steel. I'm not one of these that has trouble touching raw meat or cleaning up disgusting things. It's not that I like doing it, that would be weird. But, it doesn't gross me out to the point of my own stomach failure.

Except vomit. In all of my years of primary teaching, I never ONCE had a child throw up in my classroom! Sure, they threw up in the hall, the bathroom, the cafeteria, the playground, the gym, but NOT in my classroom! I always told them that I just don't do vomit, so if they felt the urge to purge, they need not ask for permission to run like a rocket out of the classroom and to the bathroom down the hall. They all were obedient little children, and did just as I'd asked.

Well, this morning, I did the unthinkable - I cleaned up vomit. And, I survived. Mostly. :)

As I was cleaning, I couldn't help but think, "This will help me adhere to my eating challenge, at least for a little while."

Then, I thought about all sorts of nasty ways in which tasty food, which was one-time delectable, turns into nothing but disgusting waste.

And then because I'm a thinker, I considered how a lot of things in this world start off as wonderful, satisfying things, but in the end turn to waste.

Why is it so hard for us to see that? Why are we so tempted by the ways of this world, not realizing that in the end, they were nothing but a waste?

I'm telling you, our gracious God will NOT let stewardship fall away from my constant consciousness.

Luke 8:14 says, "The seed that fell among thorns stands for those who hear, but as they go on their way they are choked by life’s worries, riches and pleasures, and they do not mature. "

God,  I desperately want to mature in You. I know the Word. I know the One. Now, keep my feet firmly planted in the Way, so that my efforts aren't wasted.

Posted by Pleasant Living at 1:22 PM