So Jesus explained, “I tell you the truth, the Son can do nothing by himself. He does only what he sees the Father doing. Whatever the Father does, the Son also does."
John 5:19 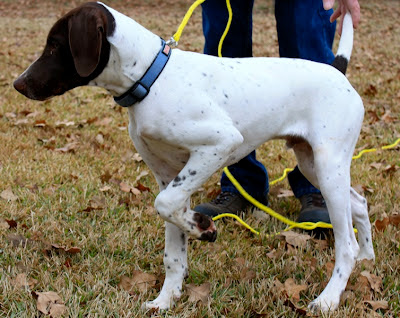 This is our youngest dog, Jethro. He is a spry German Shorthaired Pointer, and we love him! Right now, my husband and I miss him terribly while he is attending obedience camp.

Last week, we had the opportunity to go to the camp to see his progress in learning basic obedience commands. As the trainer called out a command, Jethro quickly completed the desired task. I was impressed.

After showing off a bit, the trainer gave me the opportunity to try using the commands. Though I said all of the words, my visual cues were a big mess. Ultimately, I confused the heck out of the poor pup as I said one command and signaled another. As it turned out, I was the one in need of remediation!

Sure enough, as soon as the trainer reclaimed the authority of Jethro, the little guy followed orders like a champion. When he saw the trainer give a signal, he knew the action to take.

In the Bible Jesus explained that He does nothing on His own, but rather imitates what He sees the Father doing. What a lesson this is for me!

How many disappointments and difficult situations could I avoid if I refrained from doing anything on my own, and instead only imitated what I see the Father doing?

Father, make your actions clear to me, so that I might accurately imitate You.
Posted by Pleasant Living at 10:32 AM

Our GSP is our pride and joy...such a great breed! Jethro is a handsome pup!