Some days, it just hits me hard that I am one, very blessed woman. On most Fridays, it is my custom to sleep until everyone else leaves the house, usually around 8:00. I rarely sleep that late, even on Fridays, but I just don't really want to see anyone in the mornings. I'm hugely anti-social, at heart.
Then, I get up and ease into my day. A cup of coffee. A little Today show. Lots of quiet. To me, it's just a great way to get going. Then, after I've had all I can take of the latest TV gossip, I switch the TV off and get going on the real news of the day - God's Word.
Today, as I was perfecting the wrap of my blanket around my cold feet, I thought, "This is the life! I'm so lucky!"
I'm so blessed to have a husband who provides above and beyond for my needs, so that I can ease into Fridays and relish in God's Word. We're so blessed that God provided Brian's job when He did. We're just, head-over-heels, knock your socks off, provided for!
And, now, God is showing His abundant grace to us in one more way. This photo might not look like much to you. But, it's the image of a promise to me. It's my home. 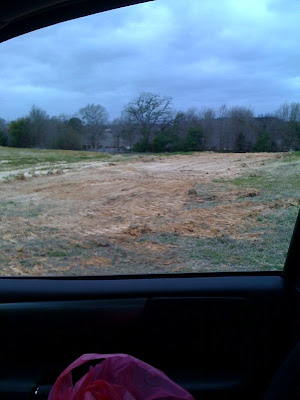 That's right. Brian and I are going to be building a home. We're ecstatic! As you know, we've been living with my sister-in-law and brother-in-law since the beginning of December. They were selfless enough to clear out their spare bedrooms for us to rent. What an enormous sacrifice on their part!
Well, since we moved in, we knew that Josh and Lauren had no intentions of adopting us, and thus we needed to be praying toward our next home. We did some searching throughout town of existing homes, and we finally came to the conclusion that we'd like to build our own. Why? I'm glad you asked.
1. Everything is new. We know we won't have to pay for major home repairs 3 months after moving in. We've been there, done that. Basically, we just felt it protected our finances a little more.
2. There won't be any fixing-up. Again, we've been there, done that. We're tired. We just want to be able to rest when we're home.
3. It's hard to find a house that's not designed for families with children. We wanted to design a house for us, and our unique family. :) AKA - I'm tired of cleaning spaces that we never really use.
So, stay tuned for home construction updates. Now, don't go expecting something huge and glamorous. It's going to be pretty, but modest. :)
The whole choosing of the builder and neighborhood was divinely appointed. Brian and I had just finished driving through older neighborhoods with mature trees. We now despise these types of lots for our own home, due to the fact that we just moved from a huge lot with tons of leaf-dumping trees. So, we had settled on the fact that we wanted something new, with no trees, not a single one!
About that time, we turned into an up and coming edition, and spotted a kind gentleman spraying off a driveway. He motioned our car over and said, "Y'all look like you need a home!"
The conversation progressed, and we learned that he was the builder/developer of the neighborhood, and we were in negotiations in no time. Provision. God's perfect provision. Never doubt it.
Posted by Pleasant Living at 12:18 PM

Congrats on the new home :) what a fun experience!

Having built a new home "just for us", I can honestly say you'll love it! Just don't let the process become overwhelming :) Congrats! :)

Forty and Trying to be Fab said...

That's wonderful! I'm so happy for you. Sounds like God knows just what you need:)

Congrats. We built a house in a new neighborhood with a builder. While it wasn't exactly custom, it was/is ours. I love that it is all clean and new. We have some small live oaks which will one day grow (although they won't be huge). They aren't leaf dumping trees so that's good too.

And by the way, I'm exactly like you in the mornings. I'm not a late sleeper but I would call myself a slow starter. Not to mention that I'm also antisocial at heart.