A couple of days ago, I was perusing through old pictures on my computer, when I came across the one below. This was my first house. The one that I bought as a single woman. This was 3 houses ago for us. We must like change. :) When Brian and I started dating, my house looked like this photo. Everything was in its proper place, not a pillow was askew and you wouldn't have found a single clump of dog hair or speck of dust on anything. I had my act TOGETHER! And, I wanted people to know that. 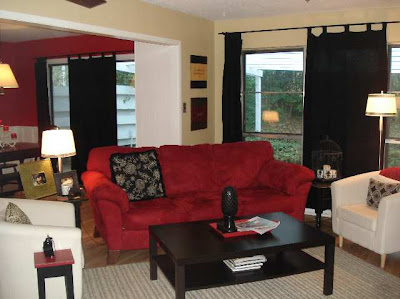 When we were engaged, we looked like the charming couple below. :) I found this picture, too. Isn't it funny how a single picture can instantly take you back to an entire set of feelings and emotions from that time period? When I look at our eyes, I see ease. I see footloose and fancy freedom. I see carefree charisma. This was in April 2008, before we got married in June 2008. 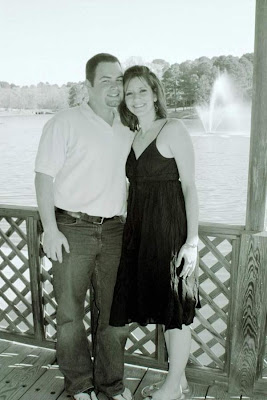 As I sat and thought about these two photos, I couldn't help but think, "I'm not that woman anymore. And, Brian's not that man." I realized the redemptive work that the Lord has been doing in our hearts and minds over the past 2 1/2 years or so, and I praised Him for it.
I praised Him because I'm now okay with people knowing that my house does have dog hair and dog slobber on various surfaces. I praised Him because I can now walk by a blanket or pillow that's misplaced and leave it that way, because nobody cares, and it doesn't matter. I praised Him because He's made me realize that change is okay, and the unknown is exciting. I don't have to sit paralyzed in fear of what might be or might happen. I praised Him because He hasn't left the two of us crazy kids as crazy kids, He's molding us. Sure, we still love moments of ease and freedom, but we are starting to get it. We are starting to get the fact that the only thing that matters is Him. That's it. If you don't close this page with any other encouragement, walk away with that. Nobody cares if you appear to have it together. Nobody cares about your clothing, cars, homes, decorations, parties, jobs. All of that is meaningless. The only thing that matters is Him.

My heart friend, Kristin, gets that. She knows that everything else is fleeting, and therefore we have to saturate our lives with Christ. This morning, as soon as my feet hit the floor, my cell phone dinged with a text from her, "Reading through Matthew, this struck me this morning...3:24 'News about him spread all over Syria and people brought to him all who were ill with various diseases, those suffering pain, the demon possessed, THOSE HAVING SEIZURES, and the paralyzed, AND HE HEALED THEM." Now, that's having it together, folks. Knowing that God's Word is the only thing that holds us together is where it's at!
He's the glue. He keeps us together.
-------------------------------------
1. In other news, thank you all SO much for leaving comments! I'm convinced that I have the most wonderful bloggy friends in all of the land! I've been praying over your requests as soon as they hit my inbox, and what a blessing it's been to me to turn my intercessions to you! The power of the Holy Spirit is incredible! And, thank you for your precious words of encouragement. Let me just say, again, it's not me. It's Christ in me. I'm an ugly mess without Him. So, any good that you see in me is strictly God's presence.
2. I don't think that I ever gave you guys a scientific update on my medical situation. The pathology of the brain tumor confirmed that it is the same breast cancer that we've been dealing with all along. So, for you medical types, I have Her2+ metastatic breast cancer with a brain lesion. Now, don't go googling that. You won't like what you find. But, you will like the fact that God is going to receive some major victory in His healing of me. I'm already shouting His power to anyone who will listen. Psalm 118:17, " I will not die but live, and proclaim what the Lord has DONE!" To God be the glory, great things He is doing!
3. It looks like my trip to MD Anderson (cancer center) won't be until after the holidays. Yippee! We were relieved to hear that we don't have to worry about ANY doctor's appointments for a couple of weeks. What a blessing! We sorta missed Thanksgiving, so we're excited to have some rest at Christmas. We desperately need it!
Love you, dear friends!
Posted by Pleasant Living at 2:56 PM

I was hoping that you wouldn't have to head to M.D. Anderson until after Christmas. You need to be able to relax and enjoy the holidays before you see more doctors. I'm glad you are going, however, I think that you will find some wise men and women there to help you. I will pray that God will show them exactly what they should be doing. A doctor here in my hometown recently said in a speech, "physicians can treat, but only God can heal". I know you know that, but it is good to remember that those doctors are just another method to bring you complete wholeness and healing. And what's really great is that you get to share your faith in our awesome God with a whole new set of people. Thinking about you and praying for you.

I will continue to pray for you. My cancer is also Her2+. God is bigger than all of this. I hope you feel well this week. Its so nice that He is showing us a much bigger picture than a clean perfect house. How about a sunset?

Praise God for your rest and time away from appointments! I hope you enjoy this time with family during such a special time of the year. You are constantly on my mind as I pray for you and aspire to be more Christ-like as you exemplify in every blog post. You (and Christ within you) are such a blessing to me! I needed to hear this message today as I have a constant "need" to have things together and it drives my husband crazy. I pray that I can get MYSELF together to not let these things bother me and focus on what does matter: HIM.

i just wanted to de-lurk for you!! your blog and your faith is SUCH an inspiration to me and challenges me as well (in a way that i NEED to be challenged!!). i am absolutely interceding for you and am so excited to see how God uses this to glorify Himself! to Him be the glory!!

So glad that you won't need to head to Houston until after the holidays. It will be so good to be able to rest and recharge with your family during this wonderful time of year.

I know that the doctors at M.D Anderson will be blessed to find the right course of action for you and to make you whole. They will be guided by God.


Always in my prayers sweet friend!

I haven't been reading blogs in such a long time, but I stopped by yours today, and have been catching up. I just want to tell you that I am stopping everything for the next few moments and praying for you and Brian. You will both continue to be in my thoughts and prayers.
In Christ,
Amy

Thankful for your much needed rest.