Pride Cometh Before a Fall

My brain spun in perfect harmony with the sound of the spinning tires. "Now you've done it!" I thought. "Now, what are you going to do?"
The last few minutes had totally changed my overall outlook. I was already running right on time to get to the service, and not a second early. As I spotted the location, I quickly noted that cars seemed to be parking along the roadway. "I'll do the same," I told myself.
Slowly, I made my way off of the road and into the tall grass that obviously hadn't been mowed for quite some time. Before I knew it, Brian's truck was taking a nose dive into a soggy drainage ditch. Boom! The truck came to a crashing halt, and no amount of gas was getting that thing to budge. The more I tried, the more the tires spun themselves into the boggy mud.
"Now what?" I wondered in a panic. I didn't think long before doing what I always do when I'm in a crisis; I called Brian. Fortunately, I must be maturing. I didn't cry. Historically, things like this have always made me cry.
Brian reassured me that everything would be okay, and that he would get some help for me. "I'll call Dale," he said. "He'll come and pull you right out." Dale is Brian's dad. About 90% of the time, Brian calls his parents by their first names. It's funny.
A phone call later, and Dale was on his way to help me. He is always willing to drop everything and help. Dads are like that. I was feeling so relieved to know that help was on its way.
I called Brian back and to tell him how sorry I was for running his truck into the ditch. Of course, he just said, "Oh, Linda, don't worry about it. It's no big deal. Dale will pull it right out." He calls me Linda.
I went on to the service, and stood there under the cloudy sky, praying for my precious friend who sat directly in front of me. I couldn't fathom what she's been through in the last few days, as she's coped with suddenly losing her mother. I didn't know her mother, and I do NOT make a habit of going to funerals. But, the Lord really prompted me to go to this one. Another reason why I must be maturing. I needed to pray my friend through it. I didn't get to talk to her in person or hug her, but I did get to see her. And, I got to smile at her as the pastor spoke. She's been a trooper this week. Her faith has been overwhelming and humbling. God is going to use this in her and in others through her. But, will you pray for her as the reality of it all sets in? I'm sure adrenaline and shock have carried her through, so far, but these next few days/weeks/months will be the real challenge. She can do it, because her walk with God is just that strong, but it won't be easy.
By the time the service was over, Dale had arrived and sized up the situation. He had a plan. Passersby stopped and offered their support and assistance, and I did take one man up on his offering to get behind the wheel of the truck while it was being pulled out. The instructions for how to turn the wheel were more than I could easily comprehend. So, I gladly gave up the seat.
At last, the chain was hooked and all involved parties were in place. Nothing. The more Dale gassed his truck, the more his tires spun. Too much more of that, and we'd have an even bigger problem.
Another man came up and offered the use of his truck. Now, I'm going to be honest when I say that I had my doubts about his truck. It was a city truck with flashing lights on top, but that's about where it's power ended. It was a small Ford Ranger. It couldn't hold a candle to the Tundra.
Just when my hope was starting to waiver, my friend's brother came along in his 4x4 Tundra. They hooked up the chain and gave it some gas. Bam! It got the job done in no time!
My heart was leaping for joy!
I quietly said to Dale, "Do you think I did any lasting damage?" He reassured me, and said he thought it was just fine.
Looks like I spared everything but my pride in this little incident. 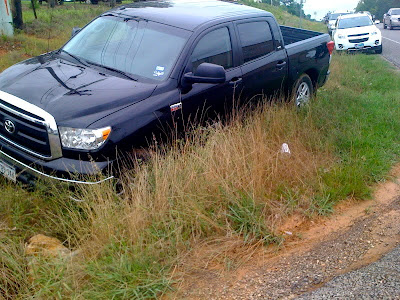 As I pulled away and the mud slung from the tires, I was quickly reminded of Proverbs 16:18, "Pride goes before destruction, a haughty spirit before a fall."
This was a humbling experience for me, to say the least. When I had to climb out the door of a sunken truck, I was thinking, "Oh, I hope no one sees me!" Of course, my friends came along about that time.
I couldn't help but wish that I had been more concerned with the environment around me, than my own lateness. If I had taken a close look, maybe I would've been able to see the ditch. Instead, it was all about me and my aim to take care of me.
This silly little experience taught me a valuable lesson about pride today. Focusing on what's around us, rather than just ourselves, can lead to blessing and favor in our own lives.
Posted by Pleasant Living at 9:47 PM

This made me think too...
Glad you and the truck were okay. =)

Laughed out loud at this story! (Not the funeral part, obviously). Glad nothing and no one was hurt!

What a humbling experience. I love the humor added in the story-you know the part about Brian calling his Dad, "Dale" and you "Linda." Seriously!! I know it's NEVER a dull moment with that guy of yours!! Glad one tundra could rescue another! PTL for your disease free report!! Have been thanking God for that!!