Yesterday afternoon, I flung open the front door to find this: 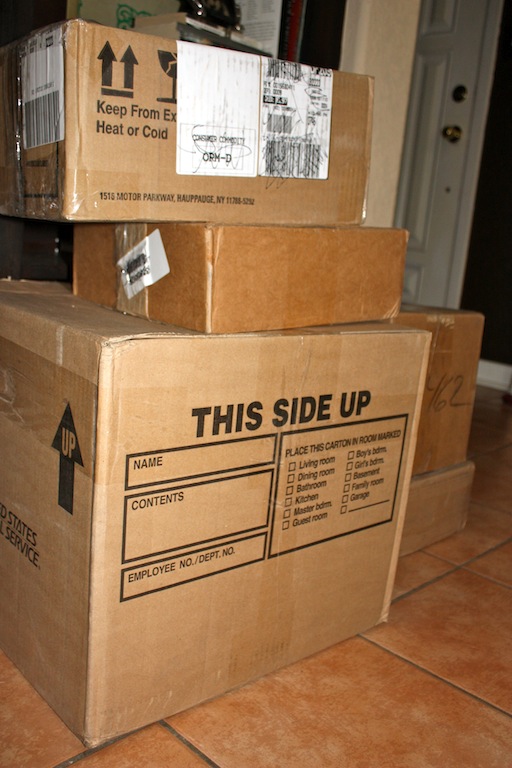 5 HUGE boxes!
Instantly, my mind went back to the email that I'd received a few days prior from my friend, Sandy, who also happens to be Brian's aunt. She sent me an email that said that she was going to send me some of her baking supplies because she's finished with them. She just doesn't do much baking anymore.
I was so excited! But, I'd forgotten that they were to arrive yesterday, so you can imagine my shock when I saw all of those parcels!
Immediately, I took the dogs out to do their business, which is why I was headed out the door, anyway. I hurried them through the process, so that I could return to my loot.
With shrieks and squeals, I ripped open box after box and pulled out item after item, as if it was Christmas morning. I couldn't believe the gold mine!
As I was working my way through box 3, tears began to sting my eyes. I realized something. I realized that this was way beyond the surface occurrence that it seemed.
You see, last week I emailed Sandy about some recipe. She is my go-to resource for gluten-free, sugar-free living. And, I mentioned that I had NO idea how to stock my pantry for gluten-free baking. Not that I want to bake every single day, but a girl needs a cupcake now and again :)
She casually said she was going to pull a few things together for me, and I didn't give it another thought. I was thinking she knew of an online list or something for pantry supplies. I was overwhelmed to be supplied with every kind of cookbook, flour, spice, pan, nut butter, etc that you could possibly need or want, even her personal notebook that she's so carefully organized and planned. She did it for me.
As I was putting each item in its new home, I thought, "I'm so glad she's on my team." And, it had nothing to do with the enormous gift that she'd just given me. Sandy was the first one to mention nutrition to me when my second diagnosis surfaced. She is the most graceful and thoughtful in her methods, too. But, you know what I love the most, she is forthright. When Sandy feels strongly about something, then she's willing to stand her ground. She's willing to speak truth, without worrying about its political correctness or conviction. She is full of knowledge, and she shares it in such an elegant way.
She is the kind of person that I want on my team. Lately, I've been thinking about those with which I surround myself. I've discovered that, for some, it's time to clean house. For others, it's time to grow those relationships. I'm realizing that I only want those in my life who are willing to stand by me and speak God's truth. I don't need those who flatter or waiver in their loyalty.
Think about your team today. Who do you allow to influence your life? Pray and ask God to give you wisdom about those with whom you surround yourself.
Posted by Pleasant Living at 6:24 AM

~from my front porch in the mountains~ said...

I feel that way,too. But, I also want the chance to be an example in someones life who is not a believer. I try not to shut anyone out. Because I never know who God is sending my way to minister to!

I can only "keep what I have by being willing to give it away."

Have fun with all your new goodies! Bake some cupcakes. Split with one with Brian and give the rest away! You will make someones day :)

Wonderful weekend to you!
misha

what a friend Sandy is to you, and what a thoughtful gift she packed up and sent to you. obviously she cares a lot. what a good reminder of the friend we need to be.

have a good weekend--maybe you'll spend some time in the kitchen? :-)

Hi Lindsey, sorry I haven't written lately, but I continue to go to the throne of your behalf. God placed you in my Spirit for a reason and so love reading your blogs. All day yesterday I repeated the verse "you call me, Lord, to walk by faith and not by sight." 2 Corinthians 5:7. And He reminded me that although I can't see all the in's and outs, I must continue to walk in obedience until I see. It may not even be on this earth but in so many instances it is walking through before I see. I am overjoyed that you received all that you need for your baking....isn't God full of surprises as He used your friend, Sandy, who was obedient and full of love. God has stocked your home pantry and also your spiritual pantry with wisdom. I find that in seasons of life, there's friends who come and go. My prayer warriors are perhaps my greatest treasure, not just to pray for me but for me to pray for them. Consider me on your team! Now have some fun with baking this weekend! You are important to God and important to me!!!!Love you, Suzanne Proverbs 3:5-6 (always)

You tease??? I wanted to see everything OUT of the box!!!!

What an amazing friend! Such a blessing to have people in our lives like that!

What a lucky girl you are to have a friend like that. Can't wait to see pics of what you make...yumm!

Please don't clean me out of your life. I like you. And I'm pretty cool :).

Thank you for challenging me to think about this and to make sure those I'm vulnerable with are on my team. I am so happy you were blessed so greatly!

What an amazing lady to have on your team! I agree, our teammates have a giant impact on our lives. It is so important to surround ourselves with goodness! Happy Friday!

Mom was filled with SO much joy when she told me about EVERYTHING that she sent you. I just knew you'd write a posting on it and I couldn't wait for you to receive your mound of goodies!!! She was just as excited to send them to you, as you were to open them. Now, whip up some delish cupcakes this weekend!! Love, Amy