Whew! I need a weekend to recover from this weekend. It's been a busy one, but a very enjoyable one, too. I'm just loving this warm weather that we're having these days. Come on, SUMMER!!!! We only have 6 weeks of school left (28 workdays, but who's counting, right? :)
My weekend was full of sports! You won't hear that from me very often. Well, unless God gives me the love for sports that I've been begging for.
My mother-in-law, Judy, got tickets to the Texas Rangers baseball game, and she invited us to go with them. Wasn't that nice? We had awesome seats! In fact, I felt like I was in the game. I just love baseball. It's so patriotic. I think that I enjoy this game more because it's slow-paced, so it's easier to keep up with. Did you know that you can know buy fresh fruit at the ballpark? How cool is that? 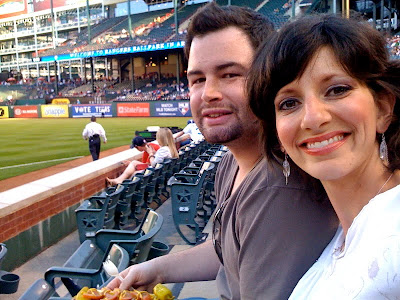 Here's a sad little fact about the Texas Rangers. I couldn't name a single player. Not a one. I think this guys name is Josh Hamilton? But, I could be wrong and I'm too lazy to go and google it. Anyway, all of the players came over right in front of us to sign autographs before the game began. Since, I didn't know their names, I didn't think it would be appropriate for me to ask for one :) 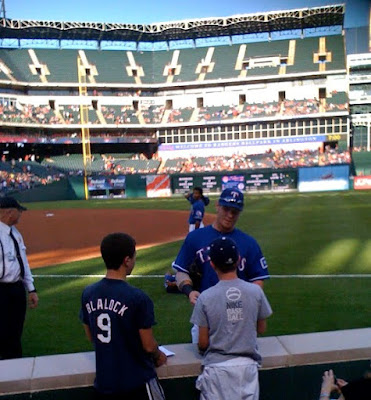 And now for the real highlight of the weekend -
My dad called me last week and asked if I was interested in going to the Children's Cancer Fund Luncheon and Fashion Show. It was a work thing for him. At first, I thought, "Sure. I can go to that." But then, Dad told me more about the event. It's this huge luncheon at the Hilton Anatole in Dallas. It's an auction, fashion show, and luncheon all wrapped into one. And, many big-name people have partnered with the organization. So, I jumped at the opportunity to go. We saw Troy Aikman, Roger Staubach, Tony Dorsett, Drew Pearson, a couple of Dallas Stars players, actress Janine Turner, Kelly Raspberry/Big Al Mac/J-Si (from Kidd Kraddick), and....
This is the former Dallas Cowboys player, Daryl "Moose" Johnston. 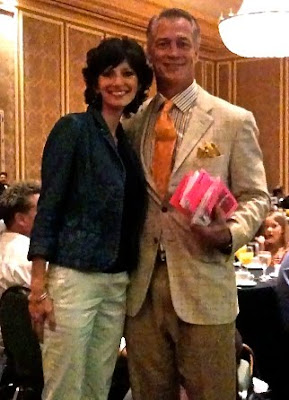 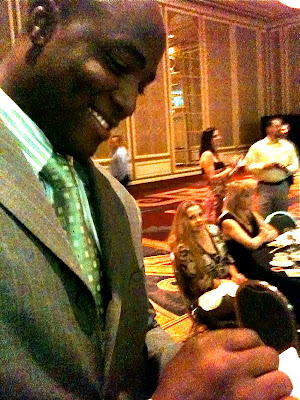 This is current Dallas Cowboys player, Demarcus Ware. He's signing an autograph for me.
And, here is my confession, I wouldn't have known either one of these guys if someone hadn't told me their names. But, I get extremely starstruck around celebrities. I just love seeing them. I don't know why I think it's so fun. They are just people, but I still think it's cool. I told Dad that I wanted to go back next year. We had a great time!
On Saturday, I got to watch my nephew, Maddox, play soccer. He is four, and you can imagine the inevitable humor of a four-year-old soccer game. We laughed our heads off while we watched.
Well, I've got a few more finishing touches to put on my weekend, so I need to wrap this up. Oh, I long for the lazy days of summer. I need some rest. Real rest. Extended time off rest.
Have a great week, y'all!
Posted by Pleasant Living at 7:06 PM

Sounds like a great weekend! I am excited about Summer coming, too. I was just thinking about it today and am also counting the days.

Yea! Go Rangers! those are great seats you had. I'm jealous. My gf and I went to the game on Sunday afternoon, it was a great day. Church then half priced upper deck tickets, it was fun. Hope you're doing well Lindsey.

oops, forgot to put my name in on my previous comment, just so you know...I'm anonymous, ;)

Hello! You don't know me, but my friend Claire follows your blog and let me know that she read that you attended Children's Cancer Fund's Luncheon and Fashion Show. I'm the Event Coordinator for CCF, and I'm so glad that you attended and enjoyed it! It's such a special day for the kids currently battling cancer, and we appreciate your support. Has your father attended our event before, or was this his first time as well? We definitely hope to see you again next year!