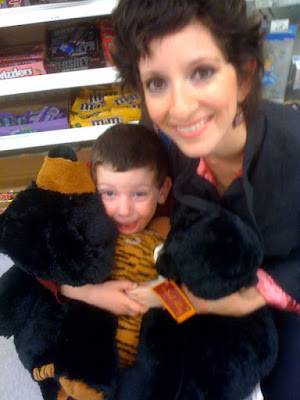 For Christmas, we got my nephew Maddox a very cool Buzz Lightyear robot. We knew that he loved Buzz. And we thought, "Oh, he'll love this!" I wrapped it with excitement, and I couldn't wait to see him play with it. Just as a precaution, I asked his parents before he opened it, "Maddox doesn't have a Buzz Lightyear robot, does he?" I could quickly tell by the expressions on their faces that he did, in fact, already have one. I was disappointed, but not crushed. After all, he had received many toys in the recent weeks, and it wasn't all that surprising.

Rather than try to pick out something that he didn't have but wanted, Brian and I just decided to take the little man with us to pick out his new toy. He was so grown up about the whole thing. I just explained that I didn't know that he already had a Buzz robot, and that I was sure that he wouldn't want two, so we would trade it in for a new toy.

Well, to say the very least, a four-year-old in Toys R Us during the week of Christmas is overwhelming. There were people everywhere, searching for all kinds of treasures.

After Maddox the Magnificent carefully poured over every aisle, weighing all of the options, he decided on three enormous stuffed animals - a tiger, a gorilla, and a bear. They were all precious. I must say, I was kind of excited to see him choose simple toys over the complicated options that are available today. 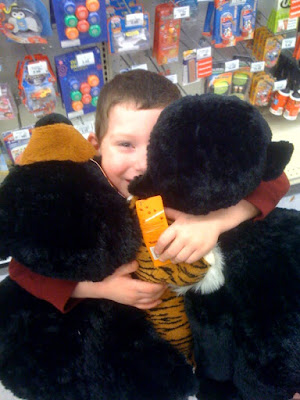 Posted by Pleasant Living at 10:19 PM

A child after my own heart! I love the simple toys: dolls, plush animals, books and blocks. Don't you wish grown-up life was that simple? Praying for you always.

It's a blast to take a small child into the toy store and let them pick something out! He'll have so much fun with that collection of animals. That's a beautiful picture of the two of you. I know you truly love him! Being an aunt is right up there with being a grandmother - a little bit of heaven.