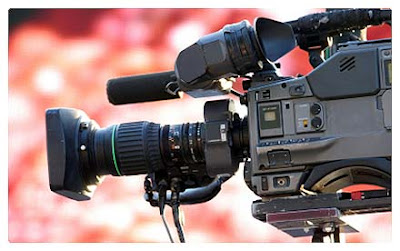 So, I had an experience today unlike any that I've ever had before. I was interviewed on TV by one of the local news stations. Can you believe that? When I got the email asking me if I would do it, my first thought was, "Oh, everyone else must be busy." Regardless of their reason for asking me, I decided to do the interview.

"Why?" you ask. Well, because I feel like God has given me a platform. I feel that He has placed me in a position of speaking out for Him. I feel called to tell others that I am a living, breathing testimony that, "With God, ALL things are possible!" (Matt. 19:26)

Notice that I did NOT say all things are easy. They aren't. In fact, most things aren't easy. This interview wasn't easy. It was scary. This morning was my first-time in a newsroom, and wow, they don't look like they do on TV. Quickly, the sound engineers gave me a microphone. Then, a few minutes later a man wearing gobs of makeup greeted me. He would be the one doing the interview. He quickly gave me a rundown of the questions he would be asking me, and with that complete, the cameraman began the countdown. 10...9....8....7.....

My stomach lurched and tied itself in even more knots than I thought were possible. Within about 15 minutes, the interview was complete and I was out of there. Now, I'm just scared to death to see the thing on TV. YIKES! I better stick to my day job!
Posted by Pleasant Living at 5:05 PM

Absolutely You! I wish I could see the interview. You have so much to share and really you've just begun. I wouldn't be surprised if your day job is replaced one of these days. There is so much on the horizon for you and Bri I just can't express it. Love you.

This cracks me up since I spent four years as a news reporter on TV every single day... It's a different world... but, it's a great world.

A Nerd and A Free Spirit said...

wow! Congratulations! You should post a link to that on your blog once it's on the newstation website! That's awesome! I bet you did wonderfully!