The Rooster vs. The Owl 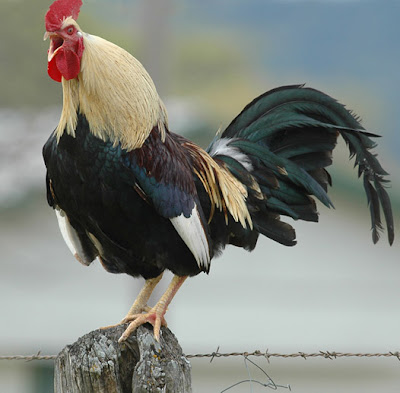 I love the way roosters look, don't you? So colorful and stately. When I look at roosters, they seem important looking to me, as if they have a special job that no other creature is capable of doing. No wonder they have to get up early. It takes effort to look like that! 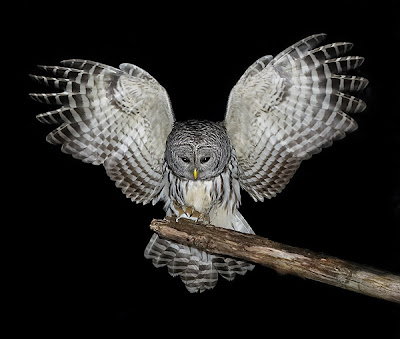 Such an odd-looking fellow. They always seem to be on a secret mission or up to no good, at the very least.
Well, there you have it - Brian and me in a nutshell. I'm the rooster, and he's the owl. I wake with the sun (actually, before the sun if the truth be known). And, when I'm up, I feel that the entire rest of the world should be up and attem', too. From the time my feet hit the floor in the mornings, I quickly busy myself with the day's tasks, and I'm ready to call it a day around 9:00pm. Even if I'm not particularly sleepy, I can assure you that I won't turn down going to bed at that early hour.
Brian is the polar opposite. He's the odd-looking fellow :). Of course, I'm only joking. He's the handsome one, but the one who always seems to be on a secret mission to keep me awake when all I want to do is go to sleep. The one who I can't pull outta bed for less than a million dollars in the mornings, the one who comes up with crazy schemes just as the sun is making its departure on the horizon.
So, I guess this is another area of give and take in a marriage - unless you operate on the same clocks, that is. For us, we hardly ever go to bed without each other, but we do have to trade off late and early bedtimes. And, I'm not sad to say that I win more than he does.
After all, it just makes good sense to go to bed early :)

Posted by Pleasant Living at 9:30 PM

Haha cute post! We are the same way, I think early bed time is best!

I'm laughing as I read this b/c my husband and I have the same dilemma! We do the trade off thing too. Initially, it was a VERY BIG issue b/c I would go to bed, and would then wake up at 3am and find he had fallen asleep on the couch! Not a happy camper... Once we started compromising, everything improved. I guess that's the key..

This is a beautiful post Lindsey. You are very observant and insightful and wise. There's good in both and both are invaluable. There is an answer to bringing the two together in harmony and I'm not sure what it is exactly but it has something to do with being honest, getting to the heart of it all, taking off the mask,and the other one's needs being as important as our own. You're on the right track with the give and take and compromise. Most couples just evolve into separate bedtimes, separate schedules, separate jobs, separate friends, separate rooms. It's a moment by moment battle to become one and stay that way. Why didn't they tell me marriage was so hard?! Worth it, but hard!