It was a big challenge to capture on film the beauty that my eyes were seeing in Colorado. It was astounding! And, I would highly recommend a summer vacation to the mountains. It was so refreshing and rejuvenating, especially when it's a sweltering 100+ degrees at home. I think the highest that it ever got in Forbes Park was 75, with lows in the 40s. You can't beat that in July! 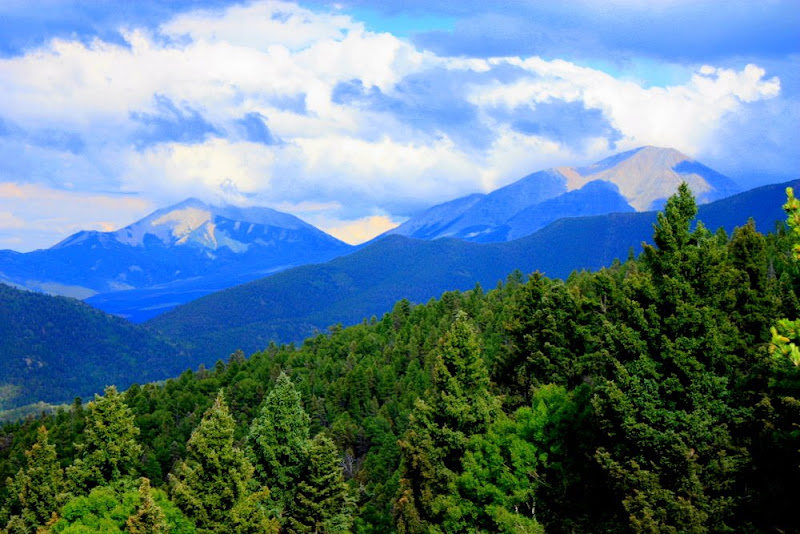 I'm not sure what it is about animals, but they are a source of fascination for both young and old. It's one of those things that all ages can enjoy together. On our second night on the mountain, Art took us for a drive through their "neighborhood" to search for wild animals. It was so much fun! We saw several herds of elk. 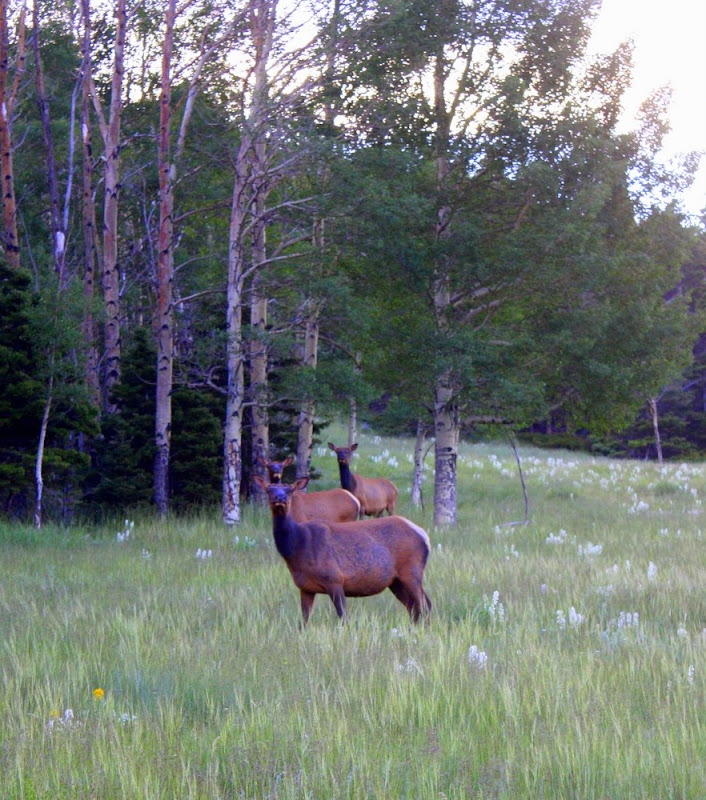 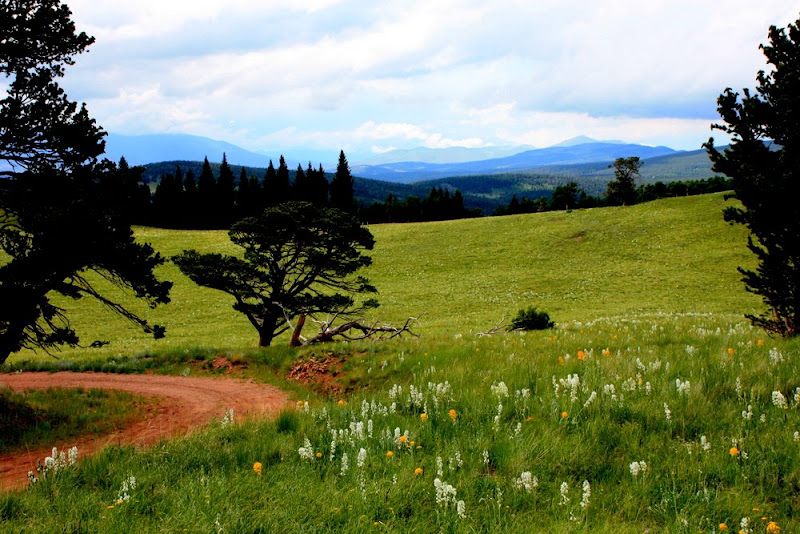 And, the deer were plentiful. Brian took this picture, and I thought it was a really neat one. 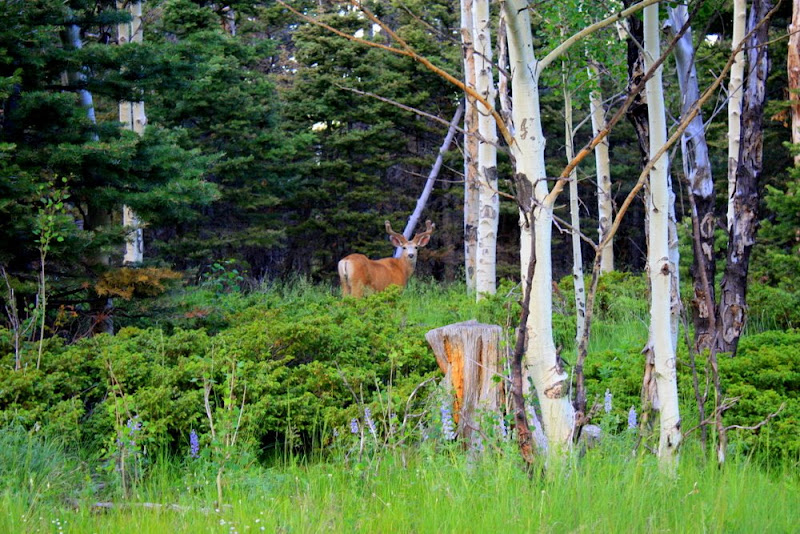 The whole time we were there we kept saying, "We want to see a bear!" A few years ago, a bear broke into Art and Jan's house and ate all of their food while they were away. They roam through the park freely. One night, while driving along, Josh spotted something moving among the tall grass. "A BEAR!" he announced. Quickly, I jumped out of the car to get a closer look. As I moved stealthily toward the bear to get a photo, another bear stood up in the grass. My heart almost leapt out of my chest, and I ran back to the safety of the car. This photo isn't the best, but it's as close as I dared to go. 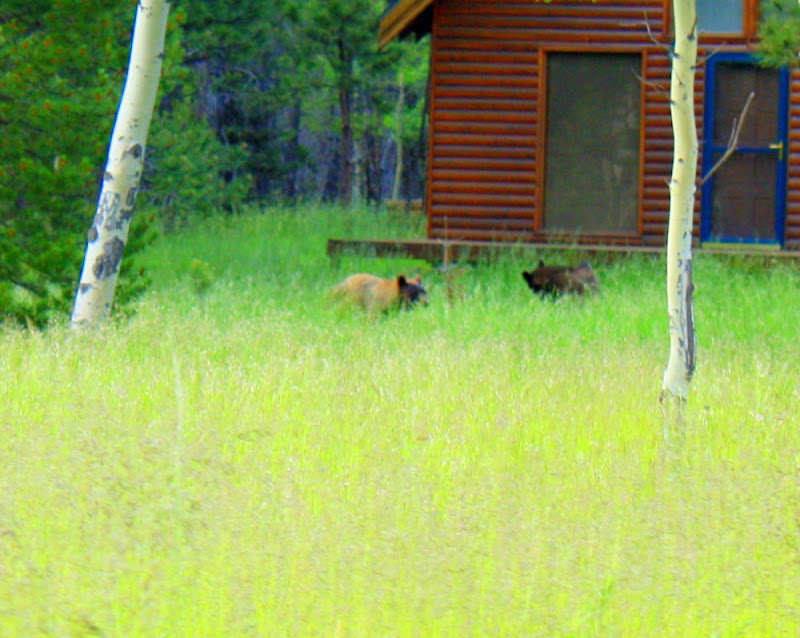 Finally, Gladys the Great! She was the wildest animal of all! I mentioned on my Tuesday post that she was MOSTLY a good traveller - "mostly" being the operative word.
When we were about 6 or so hours into the trip last Thursday, we stopped at a McDonalds along the highway. At this particular stop, there were numerous fast food establishments and gas stations, as this was the main stop for about 100+ miles. "I'll get Gladys out to go potty while you throw away our trash," I said to Brian.
I coaxed the enormous dog out of the safety of the Tahoe, and headed to what seemed to be the only grassy spot surrounding the busy intersection. As I approached the grass, a small boy, probably about 5-years-old commented in his young voice, "That's a big dog!"
I replied, "That's a frightened dog." After all, she was slinking to the grass with her tail between her legs and her hair standing on end. I had no more than uttered my last word when I heard a scream and saw a flash charging toward us. For some unknown reason, the boy took my words to mean that he should run after Gladys.
When she caught site of him, she nearly jumped out of her skin, jerking me forward and causing me to drop her leash. I scrambled to retrieve it, but my efforts were in vain. The dog darted across a busy intersection, barely escaping the tire tracks of an 18-wheeler. "Stop, Gladys!" I yelled at her. She gazed at me with a look of terror in her eyes. "Sit down, Girl!" I commanded.
Gladys hunkered down, and I was sure she was going to wait for me to get to her when she darted off again, across an exit ramp and up an enormous hill to the edge of the four-lane highway. By this time, I was panicked. Brian was nowhere to be seen, and I was torn. "Do I go after her by myself? Do I go back and get Brian? If I leave then he won't know where I am." I wrestled with this internal dialogue.
"I saw your dog run away!" a man's voice broke through the discussion in my head. "Get in and I'll take you to the other side of the freeway," a kind gentleman offered.
By this time, Brian had found me and was aware of the circumstances. "Get in!" he commanded. "Then pick me up, too!"
Kindly, the man let me in the huge Ford truck and we stopped in the middle of the intersection for Brian to jump in, too.
"I don't think she made it across, but we have to go find her!" the older man stated.
During the next few moments, we three made our way through the intersection and to the other side of the freeway. My mind was reeling with the gloomy possibilities. "What am I going to do if she didn't make it?" I questioned.
"There she is! I see her!" Brian's voice broke through the stressful silence. Those words were music to my ears. "She's down in that little gulley," he continued.
The man drove up beside the red dirt field, let Brian out of the truck, and said, "You rush her that way. I'm going to let your wife out up ahead and you guys can corner her."
In a matter of five minutes, Brian had rescued a very frightened English Mastiff. Her heart was racing, her legs were restless, but she was alive!
At last, we got her out of the field and made our way back to the safety of the Tahoe, which was parked about 1/2 a mile away.
Thank you, Brian, for rescuing my doggie. Once again, you have saved the day for me!
Now, does that look like a dog who would cause her owner so much grief? 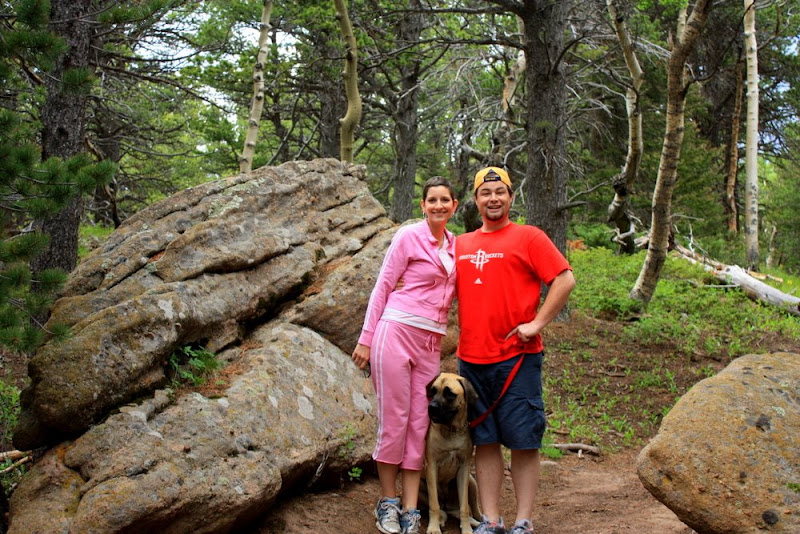 Posted by Pleasant Living at 9:44 AM

BEAUTIFUL! these pictures are fantastic. looks like you had a wonderful and memorable time. thanks for sharing! wish i was there!

WOW! These pictures are AMAZING!!

I love to see your fantastic photos! The bears...scary. The mountains...beautiful!

OH. MY. GOODNESS. I would have had a heart attack if Nuts would have done that. I'm so glad you found her.

Wow, how scary for you guys!!! I would panic if one of my pups got out around a highway...geesh!!!! Glad she made it back safe and sound.

These are the most beautiful pictures I have ever seen. I am so surprised you actually saw bears and jumped out of the car! Poor Gladys, but poor Lindsey and Brian. Oh My Goodness what a close call. Nice man. Great picture of you and Brian (and Gladys). Thanks for sharing. What a blessing!

What gorgeous pictures! Poor Gladys...she's so adorable..I'm sure she was scared to death. Glad she's safe and sound!

~from my front porch in the mountains~ said...

Lindsey,
I follow your blog and have for a long time!
I have gifted you the "Honest Scrap" award! Please go to my blog, read the post, and proceed!
You really deserve this! I hope you have fun with it, it is really a cool blog token.
Misha